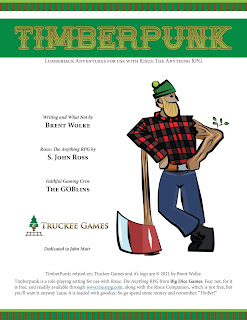 Lumberjacks explore and make a living from a mysteriously forested continent while avoiding death at the hands of rival companies, bandits, natives, and the horrific spirit that haunts the forest.

When I lived in the mountains there was a nearby road called Whistlepunk, which sounded cool, and led to examining the lumber industry, it's slang, and culture. I idly toyed with the idea of doing something with a Cyberpunk lumber crossover, but nothing came of it.

Then almost 10 years later I see a random image of an 1800s lumber tractor that looks something like a steampunk contraption, and Whistlepunk jumps back in my head, with a setting nearly entirely conceived in that moment. Seriously, it was just suddenly there, in whole, and all I needed to do was write it down. The only thing that changed was the name, and thus became TimberPunk.