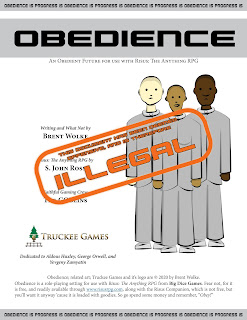 Obedience is a near-future dystopian/utopian setting that realizes the worst of my fears from today’s (circa 2020) political climate with heaping helpings of snark. It is hoped that in short order, this setting will appear dated and full of unwarranted angst.

OBEDIENCE: Main Setting Info
J. Sutton's Hand:  The recollections of a citizen who saw the unredacted portions of Obedience.


I've been toying with the idea of dystopian future setting for sometime, and in recent years even more so. Since most of the masters of this genre (Huxley, Orwell, Zamyatin) were commenting on an authoritarian central controlled dystopian point of view, I fancied a more totalitarian by committee angle.

However, it wasn't until someone(s) threatened repeatedly to dox me for over a year because of We The People that it really motivated me. This setting is highly political. It is a largely right-of-center snarky social commentary on today's cancel culture and political correctness run-amok. It won't be to the liking of most, though I attempted some tongue-in-cheek humor, and threw some bones to the left as well.

And to the person(s) who threatened to dox me...fuck you.