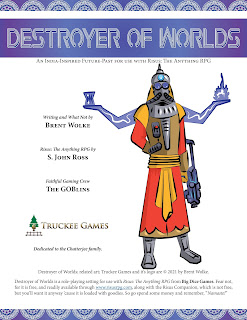 An epic sci-fi spiritual saga of a people who are born, die, and are reborn over thousands of years, and keep making the same mistakes

This one was nowhere on my gaming radar. Seriously, never put pen to paper, not a jot of idea, nothing. I had been playing in a Dune campaign and I had the idle thought, "How would I do a spiritual sci-fi setting?" And then like that, the central idea of Destroyer of Worlds came to me. It would draw on the Rama Cycle, reincarnation, vimana, and Indian history and myth.

Although I was already well acquainted with Hinduism, and India in general, to do justice to this setting, I did a deep dive into mythology, religion, spirituality, language, and a side dive into science exploring the formation of stars and planets. The project threatened to spiral out of control at several points so I had to reel it all back in to a manageable size, and leave other ideas and material for future documents.

I am proud of this setting and I believe I have honored those people from India who hold a special place in my heart.