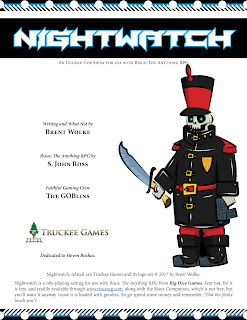 Skeleton cops patrol their skull shaped world on the lookout for flesh covered zombies, while worrying if they will be able to make the mortgage payment on their house.

NightWatch was another setting inspired by various LEGO creations which itself was inspired by a single painting I saw of a ghostly looking train in a high-tech city (wish I could remember where I saw that painting). It started off as mostly a joke, a role-reversal of everyday undead - albeit in a strange world - dealing with zombies which are actually just ordinary humans who somehow got trapped there.

As I started to seriously consider this as a possible RPG setting, it became necessary to expand the notion beyond the joke and start asking the 'what ifs' and 'whys', and from that, NightWatch as a cop show was born. The real struggle of the setting was physical nature of the world and a lot of ideas were explored. Then by chance, I saw an image of a skull with a grid overlaid upon it, making it look like city streets, and then the real work began on the setting...creating the planet Corpse, a skull shaped world.

The rest is just details.