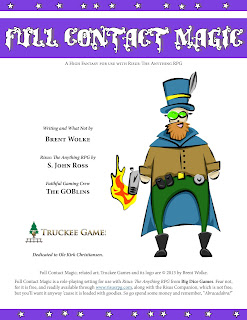 Full Contact Magic is a fantasy themed setting replete with elves and dwarves and halflings...but also a myriad of other races to play, and magic, and then there are magical mecha and tanks, and moons full of monsters. Confused? You'll figure it all out soon enough.

Speed & Sorcery: Why bother having vehicles if you can't race them?

Full Contact Magic sprang into being as an excuse for something else. A while back I took a break from gaming (for a lot of different reasons) and turned to my childhood pastime of LEGO as a creative outlet. Let's just say I had an odd sensibility when it came to creations. Heavily inspired by fantasy gaming, and anime (specifically a lot of Miyazaki films) I started to create flying skyships, fantasy mecha, and so forth. As LEGO released more and varied figures of fantasy or sci-fi races (orcs and dwarves for example), I incorporated them into these creations.

As a gamer at heart though, the one thing that I needed for these creations was back story. So, creation, by creation, built as a love letter to fantasy RPGs, movies, books, and anime, constricted by the choice of available LEGO pieces, a back story, a world that would become Full Contact Magic was built. Arcanomancy was a direct need to address the magical vehicles, while Ethermancy was created new for the setting.

The rest, as they say, is in the details.