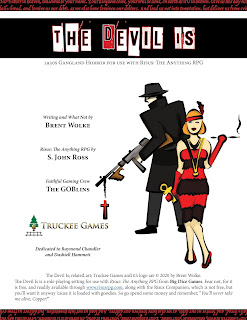 Gangland horror in the early 20th century, but is the horror man-made or from the Devil himself?  Is it real, imagined, or have you gone insane? Time will tell, if you live that long.

THE DEVIL IS: Main setting info.

The Devil Is came about as a response to Deadlands: Noir.  DL:N is a beautiful setting but I found I could not scare the players - or more to the point - every bump-in-the-night was rightly assumed to be an actual monster of some kind.  Knowing that monsters and magic was real stole the power of the game for us, so I sat down to create an occult heavy world where everything was to be questioned and suspect, and the answers never came.

I drew upon on my deep love of Raymond Chandler and Dashiell Hammett stories, and Film Noir, read and re-read, watched and re-watched, until I smelled of seedy bars, and fog shrouded docks, of desperation and sin, and then I began to write, and liberally add occult and psychological horror elements.

There isn't much more to say on the matter.