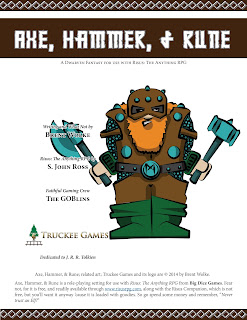 Dwarven warriors do battle with Goblins to retake the ancestral homeland, while avoiding saboteurs at home who would rather certain secrets remain buried.

Last Stand of Tyrurk: An adventure for use with AHR.
Morrok of the Forge: An example character.

AHR started life as a mini-campaign for AD&D 2nd edition. I had it in mind that I wanted to run an all dwarven campaign to retake a stronghold ala’ Moria and Balin’s quest. It got played, and was pretty fun. Later, I got ambitious, and revisited the idea for both Basic D&D and the D6 system, but this time, expand it to seven different strongholds across a range of mountains. And I would open it up to Gnomes and Halfings too. That one never got played but I always wanted to go back to it and see if it could be more than just a ‘short people campaign’.

The idea sat on the back-burner for some time, always hoping to be revisited, but waiting for the right reasons. Like most ‘what if’ situations, it was nothing more than a gimmick for play, and once the novelty wears off, it would become stale.

Sadly, it took the Afghanistan conflict, and specifically Sebastian Junger’s book War, to put the final pieces together in my mind. The dwarves were not adventuring parties…they were essentially special forces from a nation that was politically corrupt, in moral decay, and fighting an unpopular war against an enemy that was inventive, dangerous, and so ideologically opposed that no common ground could be found. The real point of AHR is that no matter the heroics, the ‘cause is hopeless. The rest is just details.