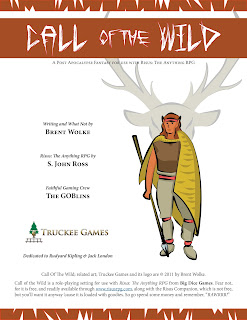 Half-human, half-animal tribes of people fight to survive the ruins of civilization, each other, and the monstrous Shadow that lurks everywhere.

Seal Territory: An exploration of the lands of the Seals.

Weapons & Armor: A rundown on stone-age weapons and armor.

The Dead Pool: A survival-horror adventure.


Most of my settings have their origins in other games that never got played, and Call Of The Wild is no exception. Back in D&D 3.0, there was a common theme of creating “new” classes by way of thematically using specific multi-class combinations or creating prestige classes. I had set-up a barbarian themed campaign wherein many different tribes were based on certain animals, and each had a specific multi-class to help push that theme. The Bear tribe, for example, had a Barbarian/Fighter multi-class called a “Feral Rager”.

Par for the course, when I looked to import these old ideas into Risus, I decided to drop the pretext of class, and went for actual transformations. Were-creatures, as it were, that represented the truly animal connection each tribe had. Still, that’s just a gimmick for play, and the real heart of the setting came when I removed it from a fantasy world and placed it instead into a post-apocalypse world. I view Call Of The Wild as the spiritual brother to Future Imperfect: Both deal with the idea of finding what it means to be ‘human’, to play with the definition of civilization, and to find hope in the future by solving the past. The rest is just details.