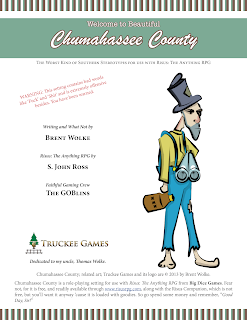 WARNING: Chumahassee County is extremely offensive, both in language and content.

Somewhere in the deep south, in an unnamed state, exists Chumahassee County. It is a place where town folk, inbred hillbillys, aliens, bigfoot, cannibal killers, and every other gonzo idea exist side by side...often with hilariously offensive results.

Pop Culture Guide: A guide to references made in all documents, plus a Bonus! Channel 26 - UHF!

The original spark for Chumahassee County began nearly 20 years ago. As part of my job at the time, I called a lot of places in Florida looking for the locations of property. Staring at a lot of swamp filled maps with funny, and vaguely obscene, names certainly gave me some ideas, but it wasn't until I spoke with a genuine Seminole Indian (with his own amusing name) where the idea really gelled. Red Barnes was his name, and he worked at a post office. He gave me directions to a property up in the pan handle of Florida and said, and I quote, "But you don't want to go up there...if the gators don't get you, the hillbillies will".

Now considering the time - sometime around 1996 - I didn't have many options as to an RPG that allowed you to play hillbillies. The idea went onto the back burner and nearly forgotten until a relative started getting into crypto-zoology (Big Foot) and somehow that original idea sprung forth and mated with the idea of Big Foot into this notion of a fictional county somewhere in the South. It would be replete with all the worst and offensive stereotypes of Southern inbred legends mixed with Big Foot (and every other cryptid), which opened the doorway to a true gonzo setting of aliens, the supernatural, gators, and of course, hillbillies.